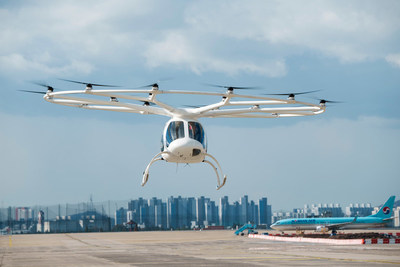 Florian Reuter, CEO of Volocopter said, “With MOLIT’s comprehensive K-UAM roadmap, South Korea is well positioned to achieve the goal of commercializing UAM by 2025. We are extremely honored to conduct the nation’s first crewed public eVTOL test flight today and prove yet again that the future of air taxis is here and now with Volocopter’s aircraft. As the pioneers of the UAM industry, we look forward to working closely with friends and partners from both the government agencies and private sectors to make UAM a reality in South Korea.”

German Ambassador to South Korea Michael Reiffenstuel said, “South Korea and Germany have enjoyed a close relationship for more than a century. We are connected by a common experience of a divided nation and strong ties in trade, education, and technology. We strongly welcome deepened cooperation in new sectors such as digitalization, e-commerce, and urban air mobility.”

Seoul is the second city in Asia that Volocopter has conducted a test flight following the first successful public flight trial over Singapore’s Marina Bay area in 2019.

Volocopter is leading the pack in the UAM sector with a family of aircraft that can transport passengers (the VoloCity and VoloConnect) and goods (the VoloDrone). It is the only eVTOL company that has obtained design and production organization approvals from European Union Aviation Safety Agency.

Volocopter is scheduled to conduct a public test flight at Incheon airport on 16 November (weather permitting) during K-UAM Confex 2021.

Volocopter is building the world’s first sustainable and scalable urban air mobility business to bring affordable air taxi services for goods and people to megacities worldwide. Volocopter leads and cooperates with partners in infrastructure, operations, and air traffic management to build the ecosystem necessary to “Bring Urban Air Mobility to Life.” Volocopter has 400 employees in offices in Bruchsal, Munich, and Singapore. The company has raised a total of €322 million in equity form investors including Daimler, Geely, DB Schenker, BlackRock, and Intel Capital amongst others. www.volocopter.com