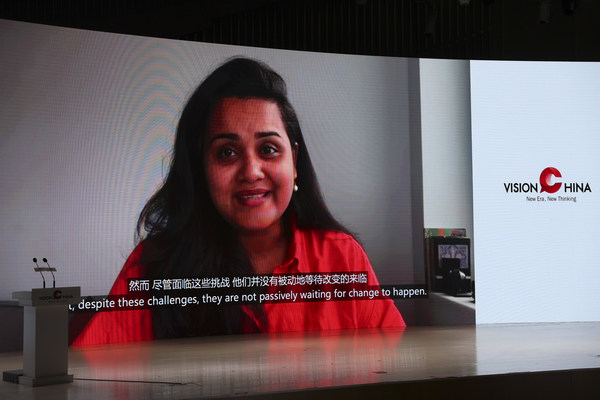 The people of Generation Z in China and around the world should shoulder more responsibility and make bigger contributions to building a community with a shared future for mankind, experts said.

They can play an active role in promoting communication among young people around the world and facilitate people-to-people exchanges worldwide, they said at the latest Vision China event organized by China Daily on Wednesday.

Themed “Young Voices, Global Vision”, the talk was held online and offline in Chengdu, Sichuan province. It invited five Gen Z speakers from China, Belarus, the United States, Pakistan and Egypt to share their views on China through their personal stories as well as thoughts on global issues.

Jayathma Wickramanayake, the United Nations secretary-general’s envoy on youth, said youth have the potential and power to shape their own future.

“With more than 1.8 billion young people around the world, our generation has an enormous opportunity to transform our societies, especially as we look to recover better together from the COVID-19 pandemic,” she said via video link.

When the pandemic broke out last year, young people all around the world, including here in China, sprang into action and joined the front lines of the response and recovery efforts as first responders and as health workers, leading online and offline information campaigns, supporting the vulnerable in their communities, and in so many more ways, she said.

How the world meets the needs and aspirations of young people will define the common future, especially as younger generations become a more influential consumer group and employee demographic, she said.

“Young people are creators, builders and leaders of the future. It is your unwavering passion and motivation to fulfill your dreams and to be agents of positive change that inspires me every day.”

In the just-concluded Tokyo Olympic Games, it was also inspiring to see so many young people front and center, including the many young refugee athletes who competed. The determination of these young athletes is yet another example of the courage, strength, determination and hope young people bring to the table, she added.

In his speech at a ceremony marking the Party’s centenary on July 1, President Xi Jinping called on young people to make it their mission to contribute to national rejuvenation.

“The future belongs to the young people and our hopes also rest with them,” Xi said.

Liu Weiling, deputy editor-in-chief of China Daily, said no matter in what age and in which country, young people are the most active and vibrant forces of society.

Like galloping horses, generations of inspiring young people have pushed ahead the wheels of history and made positive contributions to their countries and the entire world, Liu said.

Aged 11 to 26, the people of Generation Z are at the critical stage of personal enrichment and learning. With abundant resources and opportunities waiting for them, they are also living in a world undergoing profound changes unseen in a century and faced with unprecedented and complicated challenges, she said.

“The world belongs to you,” she said. “We believe that you will live up to the important responsibility and build a community with a shared future for mankind featuring peace, development, civilization and prosperity.”

Tang Jie, who is from China and graduated from Harvard University, said China has secured victory in its fight against poverty, but this scourge lingers all over the globe.

It remains one of the most challenging human malaises. And tackling global poverty and promoting development will be one of the major responsibilities of young people in the decades to come, he said.

Zhuo Yue, a Belarusian international student at Beijing Foreign Studies University, said: “As a Gen-Zer I would like to say, like our predecessors, we will grow up one day and carry all their best qualities. The difference is that, I believe, intercultural connections are getting stronger than at any time in the history.

“Cooperation among countries is essential and as far as I’m concerned it will flourish really soon. So it is important for us to strengthen intercultural skills and be prepared for the new era of great responsibility and great achievements,” she said.

According to Dylan Walker, a young communist from the United States and an international student at Beijing Language and Culture University, young Party members in China and around the world should firmly believe that socialism is good, the Communist Party of China is capable and that Marxism works.

“To inherit and carry forward human civilization, we youth should keep seeking common ground while reserving differences, learn from each other, look at our world with equality, respect and love each other and view different civilizations with an attitude of appreciation, tolerance and mutual learning.”

Javaria Nasir, a Pakistani international student at Fudan University in Shanghai, said she is about to graduate and start her life as an actual doctor next year.

“I hope I can continue to study here for a postgraduate degree and work as a doctor. Hopefully, I will one day be able to repay some of the kindness that China and its people have shown towards me,” she said.

Taking the idea of promoting understanding between the peoples of China and other parts across the world including the Middle East as her guiding principle, 26-year-old Mehad Mousa from Egypt has been working hard to translate Chinese literature into Arabic and conduct cross-cultural research in recent years.

Like many of her peers, Mousa once thought of China as a huge, well-known but somehow mysterious country, but what she has experienced since coming here has changed that view, she said.

Her new perspective encouraged her to share what she has learned about China, to reveal a more accurate image of the country through her translations and cross-cultural research, she added.

Launched in early 2018 by China Daily, Vision China invites political, business and academic speakers to tell China’s story from a global perspective. Previous talks have been held 20 times in places such as Beijing, Tianjin, New York and London.

By Zou Shuo and Huang Zhiling in Chengdu 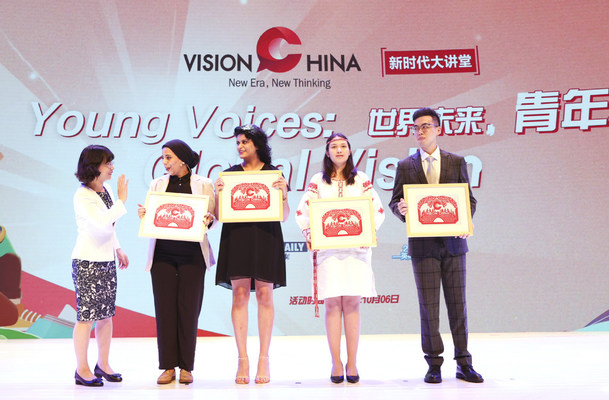