BELLEAIR, Fla., Aug. 24, 2020 /PRNewswire/ — This week, women nationwide are being called to come together – albeit virtually – and recognized the 100th Anniversary of women’s right to vote. To mark the historical milestone, philanthropic women’s empowerment group Impact100 Council is hosting EqualiTEA, a virtual zoom event, in partnership with S’well and Girl Scouts Councils around the U.S. Held on August 26, Impact100 Council invites all generations of women to #RaiseYourCup in solidarity and celebration of women’s right to the ballot, and honor the women of our past, present, and future. 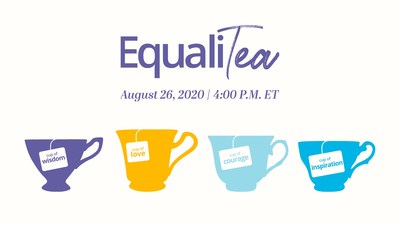 “Although I founded Impact100 in 2001, our story truly began in the mid-1800s, with the women’s suffrage movement and the decades of protesting and fighting for equality that followed,” said Impact100’s founder Wendy Steele. “It’s this legacy of women, empowerment, and leadership that defines Impact100 and stands as a testament to the collective power of women.”

Known as suffragists, one activist working for the right to vote in Michigan was Margaret Hankey Curtis (1878-1950), great-grandmother to Steele. Just three generations between them, Steele said the recent discovery was further confirmation that she was born to do this work.

For nearly two decades, Impact100 has been using the power of collective giving to unite women across the globe and transform communities worldwide. Founder Wendy Steele created Impact100 because she saw women being overlooked and left behind in the social change conversation – in both philanthropic leadership and giving. What started as Steele’s calling to overcome these barriers she and others faced, has grown into a multifaceted nonprofit enterprise with more than 60 chapters donating nearly $80 million in transformative grants to worthy causes worldwide.

The EqualiTEA virtual Tea Party will be held on Wednesday, August 26, at 4 p.m. EST. To register, visit impact100council.org/equalitea. In support of EqualiTEA, all purchases on swell.com during the month of August that use the fundraiser code EQUALITEA will trigger a 20% donation to Impact100 Council.

About Impact100 Council
With over 60 Impact100 chapters across the globe, Impact100 Council supports those chapters that are empowering women as philanthropists to create transformational change in their local communities. Each Impact member gives an annual gift of $1,000 and those gifts are pooled together to create grants of $100,000. To learn more, visit impact100council.org.