SINGAPORE, Nov. 18, 2021 /PRNewswire/ — The9 Limited (Nasdaq: NCTY)(“The9”) today announced that NFTSTAR, a wholly owned subsidiary of The9 for NFT trading and community platform, has signed an exclusive license agreement with two-time NBA MVP, Giannis Antetokounmpo, and his three brothers, Thanasis Antetokounmpo, Kostas Antetokounmpo and Alex Antetokounmpo. NFTSTAR will develop, sell, and trade NFT collections authorized by the Antetokounmpo brothers, and the brothers will become global ambassadors and shareholders of The9 Limited and NFTSTAR. 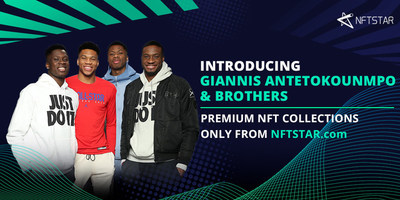 The 2021 NBA Finals MVP and Champion, Giannis is a global superstar and one of the most exciting players in the NBA. The five-time NBA All-Star has been named to the All-NBA First Team three times, All-NBA Second Team twice and was named the 2020 NBA Defensive Player of the Year. Originally from Athens, Greece, Giannis and his family emerged from humble beginnings and have flourished into one of the most recognizable families in sports around the world.

With family at the center of everything the Antetokounmpo’s stand for, Giannis will be joined by three of his four brothers, who are all professional athletes, in this partnership. Thanasis, the second eldest Antetokounmpo brother, is a forward for the Milwaukee Bucks and a member of the Bucks’ 2021 Championship team. Kostas, who was drafted in the second round of the 2018 NBA Draft, won his first NBA championship in 2020 with the LA Lakers. The power forward is currently signed with LDLC ASVEL, a French professional basketball team in the top-tier level French Pro A League. The youngest of the Antetokounmpo brothers, Alex, currently plays with the Raptors 905 in the NBA G League, after winning the 2021 NBA Summer League Championship as a member of the Sacramento Kings.

The four brothers will work with NFTSTAR’s creative team and artists to develop a series of NFT collectibles, including videos, animations, and other digital artworks. These collectibles will chronicle and highlight their careers, personal growths, and important beliefs.

NFTSTAR is a NFT community and trading platform for users to purchase, trade, and interact. The major transaction contents of the platform are NFT collections developed with global superstar licensed IPs. Each NFT collectible has a unique record on the blockchain, and the users will obtain the ownership of the unique NFT collectible through purchase on the platform, or through trading on NFTSTAR’s marketplace. NFTSTAR will accept general payment methods such as credit cards to make it easy for global users to participate.

NFTSTAR Community will feature celebrities from various fields, including but not limited to sports, entertainment, art, and other industries. NFT Community aims to create and empower the ‘Metaverse’ through trading, collection, and engagement with NFT collectibles which the IPs are authorized by the celebrities.

The9 Limited (The9) is an Internet company listed on Nasdaq in 2004. The9 aims to become a global diversified high-tech Internet company, and is engaged in blockchain business including the operation of cryptocurrency mining and a Non-Fungible Token platform NFTSTAR.