LOS ANGELES, Nov. 15, 2021 /PRNewswire/ — Pro Football Hall of Famer Shannon Sharpe today revealed his new premium cognac, ‘Shay by Le Portier‘.  This exciting new cognac will be unveiled with an exclusive launch party in Los Angeles, California on November 16, 2021. Sharpe will host an elite crowd of athletes, entertainers, friends and VIP guests for a night that promises to deliver the spirit lover’s signature “Club Shay Shay” state of mind to cognac connoisseurs across the country. 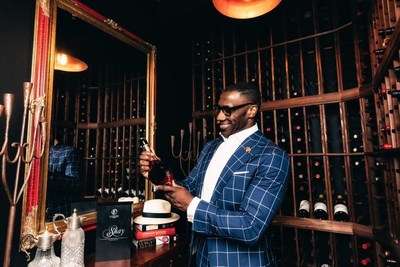 “So much of the inspiration in my life comes from the places I’ve been, and people I’ve met through professional football,” says Sharpe. “I started thinking, ‘What if I could share that sense of connection and conversation with friends with everyone!’ That’s the reason for creating Le Portier Cognac.

Founded by Sharpe in partnership with leading luxury spirits experts, Le Portier is a testament to Sharpe’s unmatched passion for cognac. Leveraging the team’s industry expertise and insider resources, the founders have researched and developed a dynamic new approach to the spirit market. They are now embarking on what promises to be an exciting and lucrative partnership as Battle Born Spirits, LLC, and are proud to launch their first brand, Le Portier.

In bringing to market a cognac that complements his impeccable taste and eye for style, he honors his grandmother, Mary Porter. Every element of Le Portier is conceived to pay homage to the woman who made his success a possibility.  Le Portier is the French rendering of Porter, and in naming the company after Mary Porter he recognizes the strong foundations she built so that he and Sterling could succeed.

Le Portier will launch on ReserveBar with plans for further expansion in 2022. Please visit leportiercognac.com for more information.

*For a full list of VIP attendees and to cover the event email Jen@allaccesspromo.com

ABOUT SHAY BY LE PORTIER
Le Portier’s inaugural release, Shay V.S.O.P. (SRP $84.99) will be released in limited numbers from December, with future luxury releases to be announced. Shay is a sophisticated spirit and a modern expression of an ancient craft; a world-class blend of Grande Champagne, Petite Champagne and Fin Bois, aged for more than four years in French Oak Barrels.

The sleek bottle is housed in a rich, black wooden box, a soft gray lining protecting the liquid. Designed by an award-winning team, every element has been considered to honor the quality of the cognac. Significantly, the bottle is topped with a semi-precious gemstone black obsidian closure, making this a true collector’s item. Each limited release of Shay features a different initial monogrammed on the closure. The collectors who succeed in securing all nine releases of 25,000 bottles will have a collection of closures to spell out LE PORTIER.

ABOUT SHANNON SHARPE
Shannon Sharpe is a sports analyst and former American football tight end for the Denver Broncos and Baltimore Ravens of the National Football League (NFL).  Sharpe is currently co-host on Fox Sports “Undisputed” and hosts his podcast “Club Shay Shay” – that has quickly become the fastest growing digital show, achieving 226k subscribers in 9 episodes and 8.5m views in its first 9 weeks.

He is widely regarded as one of the greatest tight ends of all time AND one of the top social media influencers in American football, both active and retired. He is the ONLY NFL personality to hit over one billion engagements in 2019 across Instagram, Twitter & Facebook.