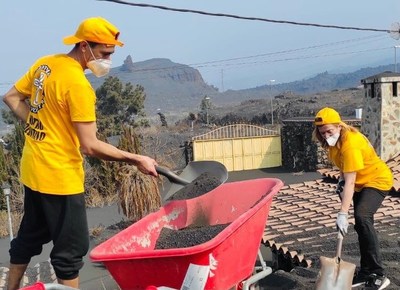 To date, Volunteer Ministers have contributed some 1,000 volunteer hours in response to the La Palma volcanic eruption.

The volcano began exploding September 19 and continues unabated, causing evacuation of some 7,000 residents, destruction of more than 2,100 buildings and many more buried in ash. The lava flow covers nearly four square miles, cutting across the coastal highway and forming a new peninsula.

To date, Volunteer Ministers have contributed more than 1,000 volunteer hours, cleaning massive amounts of ash from rooftops of homes to avoid their collapse. The Volunteer Ministers are also removing ash from streets, cleaning up schools, and organizing and distributing food and clothing pouring in to the island from other charities.

In addition to their physical help, Scientology Volunteer Ministers are known for providing Scientology assists—techniques developed by Scientology Founder L. Ron Hubbard that address the emotional and spiritual factors in stress and trauma. Often referred to as “spiritual first aid,” Scientology assists help people deal with the loss and confusion suffered in times of disaster.

The Church of Scientology Volunteer Ministers program is a religious social service created in the mid-1970s by Scientology Founder L. Ron Hubbard. It constitutes one of the world’s largest independent relief forces.

With the events of the 9/11 terrorist attacks in New York City, Scientology ecclesiastical leader Mr. David Miscavige called on Scientologists to redouble their efforts to aid their fellow man. He issued a directive entitled “The Wake-Up Call,” which inspired significant growth within the Volunteer Minister program.

A Volunteer Minister’s mandate is to be “a person who helps his fellow man on a volunteer basis by restoring purpose, truth and spiritual values to the lives of others.” Their creed: “A Volunteer Minister does not shut his eyes to the pain, evil and injustice of existence. Rather, he is trained to handle these things and help others achieve relief from them and new personal strength as well.”