MIAMI, Nov. 22, 2021 /PRNewswire/ — Xtreme Fighting Championships (XFC) announced today it has engaged an investment banker and raised the first of several expected equity and debt tranches that will fuel a planned 12-event live fight schedule in 2022 and 56 televised fights over the next 12 months. XFC recently filed an S-1 registration statement with the SEC and plans to use the net proceeds for promotions and new fighter signings with its sights set on a targeted NASDAQ uplisting by the end of 2022. 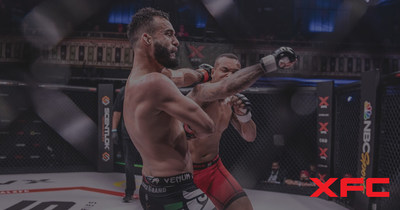 Reemerging mid-COVID under new leadership and a roster of the next great MMA professional fighters, the XFC (OTC:DKMR) spent 2021 building its platform and network of international broadcast and pay-per-view partners to prepare for a 2022 strategic re-launch. The strategic plan approved by the Board includes:

“We’ve clearly weathered the headwinds of COVID as a live-sports league and also the challenges of a start-up as we worked to reestablish the XFC as a premier MMA fight league,” said Steve Smith, Chairman and CEO of the XFC. “2021 laid the groundwork for a break-out year in 2022, and this capital raise positions the Company to unlock our aggressive growth and the insatiable demand by our fans for more and bigger fights. We look forward to continued investment by institutional investors and everyday fans alike as we rebuild the XFC into the powerhouse it once was and can be again.”

XFC hosts its new fight – YoungGuns 4 – on Dec. 10 live from its former headquarters in Michigan. The Young Guns tournament will feature a co-main event and a return to the ring of Kenny “the Boss” Cross, as well as undefeated super prospect Austin Bashi. The fight in Grand Rapids, Mich. is expected to be its last in the market as the XFC moves to larger venues, including FTX Arena in Miami, where the XFC has moved its corporate headquarters.

“Michigan has birthed many of our greatest XFC fighters, and we know they will put on a show for the fans and for the hundreds of millions of households tuning in to YoungGuns 4,” Smith added. “YoungGuns 4 will be a catalyst to launch the XFC into full attack mode in 2022, and we look forward to rewarding our investors, fighters and fans with not just great MMA fighting and content, but a strong and growing company and stock.”

About XFC
Headquartered in downtown Miami, Xtreme Fighting Championships, Inc. (“XFC”) is the first publicly traded premier international mixed martial arts (“MMA”) organization, trading under the ticker symbol DKMR. XFC is currently ranked #1 in MMA broadcast distribution reaching more than 780 million households worldwide. XFC’s owned and operated OTT channel “XFCTV Fightworld” averages 220,000 viewers daily, in addition XFC partners with 36 broadcasters worldwide, including HBOMAX globally and the FOX family of networks in the United States. XFC has previously been carried on some of the largest open television broadcasters in Latin America – Rede TV! as well as ESPN, NBC Sports Network, Telemundo Universo, Esportes Interativo, Terra TV (the largest internet portal in the world), and UOL – the largest internet portal in Latin America, and premium cable and satellite television networks. The XFC currently has more than 83 exclusively signed fighters, representing over 35+ countries worldwide with even more growth expected. Boasting the signing of the “Next Generation of Male & Female Superstars”, the XFC is known for entertaining fans with the most action-packed MMA events both on television and in stadium venues.