TORONTO, April 5, 2021 /CNW/ – Pink Triangle Press (PTP), Canada’s leading LGBTQ2S+ media group, announced today the appointment of Natasha Garda to its Board of Directors. Natasha joins a Board of four other volunteer directors, elected by its membership. In 2021, PTP celebrates 50 years as an independent media organization that continues to find new ways to engage and connect LGBTQ2S+ communities, expanding into multimedia and technology while remaining true to its mission: “Passionate communities daring together to set love free.” 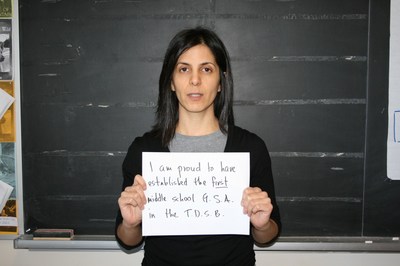 After a rigorous search, the board of directors for PTP concluded that Natasha’s involvement with Toronto’s LGBTQ2S+ communities and her governance experience on a number of community boards, made her an outstanding Board director candidate. Garda comments:

“I’m excited to be the newest member of the Pink Triangle Press Board of Directors. I look forward to sharing my skills and experiences while co-learning with an elite group of staff and Board directors.”

Natasha has also been an active member of Toronto’s LGBTQ2S+ communities for over 15 years. She has had the privilege of sitting on a number of community boards such as the Sexual Diversity Studies Program Advisory Board, U of T (director),  The 519 Community Centre (Chair), and Pride Toronto (Co-Chair).

Natasha has spent the past 14 years at the Toronto District School Board (TDSB) as a teacher, learning coach, and in a multitude of other leadership positions. At the TDSB, Natasha established the first Gay-Straight Alliance (GSA) in a Toronto elementary school in 2010.

Board Chair, Ken Popert, says “Our organization has always valued activism and we aim to raise new generations of activists, so i’m happy that our newest Board member has a valiant history as an organizer of GSAs and brings to us a unifying network of connections to our diverse, multicultural and often splintered communities.”

Born and raised in Toronto to biracial parents and spending much of her childhood in South Africa, Natasha has a deep connection to equity and social justice which has been integral to her growth in anti-oppression work both personally and professionally.

About Pink Triangle Press (http://www.pinktrianglepress.com) Pink Triangle Press (PTP) is Canada’s leading LGBT media organization. Founded in 1971, Pink Triangle Press produces LGBT journalism at Xtramagazine.com and through a variety of content distribution channels in Canada and abroad. The Press operates the gay adult dating website Squirt.org and has produced a number of television projects, including The Gayest Show Ever, the travel series Bump!  and the documentary Unnatural Disasters.

PTP’s defining activity is LGBT journalism. Frustrated that there wasn’t a voice representing the political and social concerns of gay men and lesbians, a group of Toronto activists launched the gay liberation newspaper, The Body Politic, in 1971. In 2008, The Body Politic was named by Masthead magazine as one of “Canada’s 20 most influential magazines of all time.”

Over 50 years, PTP grew from a small grassroots operation to one of the most diversified LGBT multimedia enterprises in the world, with a roster of brands ranging from the Xtra publications in Toronto, Ottawa and Vancouver, to online publishing and television production.

PTP is a mission-guided community organization without shareholders, governed by a board of directors. The board entrusts the achievement of our mission to the executive director, who heads a workforce located in Toronto, Ottawa and Montreal.

The chronology of Pink Triangle Press from 1971 to 2014 is available here.