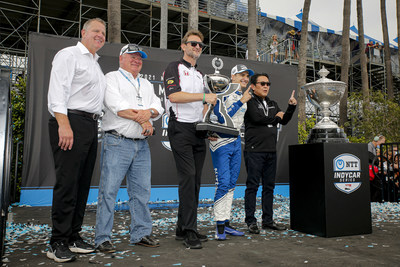 Needing only an 11th-place or better result to secure the title, Palou kept his nose clean on the unforgiving downtown streets that make up the temporary Long Beach street circuit, but continued to run in the lead pack through most of the 85-lap contest to give team owner Chip Ganassi his 14th Indy car title.

Honda also powered today’s race winner, as Andretti Autosport’s Colton Herta led 43 of the 85-laps to notch his third victory of 2021, and the first at his ‘home’ Long Beach circuit.

Quotes
Colton Herta (Andretti Autosport Honda) Race winner, his third win of 2021 and sixth career Indy car victory: “It feels amazing [to win the Acura Grand Prix of Long Beach].  We brought a great car here, and [this race] has been on the ‘bucket list’ for so long for me, I’m at a loss for words.  It took a lot of work [to get from 14th to Victory Circle] and it’s such a big race for Honda and Acura, so happy to have a win here for them, too.  What a way to cap off the year!”

Alex Palou (Chip Ganassi Racing Honda) 2021 NTT INDYCAR SERIES CHAMPION; his first Indy car championship and the 18th for a Honda-powered driver. Palou’s title comes 25 years after Jimmy Vasser won Honda’s first Indy car drivers’ title – also with a fourth-place finish, at Laguna Seca in 1996: “Oh my gosh man, what a race today, and what a year.  This team is amazing.  I don’t know what else to say.  I’m super proud to be part of Chip Ganassi Racing, Honda, and all our partners.  Yeah, I’m super happy.  I can’t thank enough everyone who made this possible, [team owner] Chip Ganassi especially. This is one dream for me completed. Now let’s get another one!”

David Salters (President, Honda Performance Development) on winning both the 2021 INDYCAR Manufacturers’ and Drivers’ Championships: “To paraphrase the iconic lyrics of David Byrne and the Talking Heads:
You may find yourself in a brilliant HPD with 230 smart Honda men and women who live the dream of Honda and Acura racing in the US.
You may yourself in an awesome part of the world called Santa Clarita, California, and Brownsburg, Indiana.
You may find yourself working for the coolest, funkiest racing company that is Honda
You may find yourself in a beautiful Acura Long Beach Grand prix, which is a beautiful house, with a beautiful wife.
You may ask yourself ‘how did we get here?’
The answer is:  the dedication of the men and women of HPD who start with a clean sheet of paper and design powertrains and chassis, simulate, manufacture, assemble, develop and test, develop aerodynamics and vehicle dynamics simulation and simulators, electrical hardware, software and control systems, use advanced data analytics, and develop and analyze advanced materials.
Team HPD, we salute you for the four consecutive Indy car manufactures titles; Helio Castroneves your fourth Indy 500 victory; and Alex Palou, we salute your first Indy car Drivers’ Championship.
Thank you to our brilliant Honda racing teams.
This is once in a lifetime.”

Next
Today’s race concludes Honda’s championship-winning 2021 NTT INDYCAR SERIES.  The 2022 season gets underway February 27, with a return to the Florida Gulf Coast for the Firestone Grand Prix of St. Petersburg.