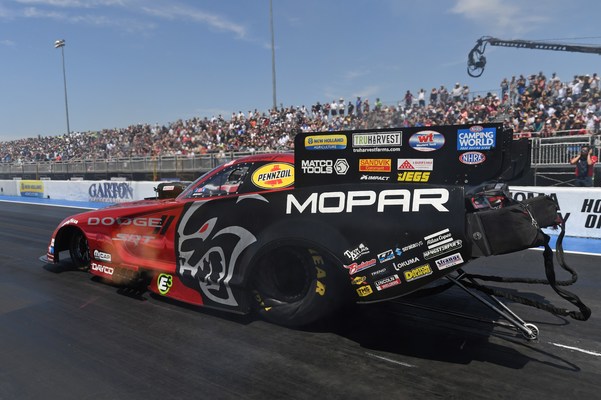 Drag racers are ready to head to the staging lanes at the 21st annual Dodge//SRT Nationals Presented by Pennzoil for the penultimate National Hot Rod Association (NHRA) ”Countdown to the Championship” playoff event of the season at The Strip at Las Vegas Motor Speedway Oct. 29-31. Three Dodge Charger SRT Hellcat Funny Cars are among the top five contenders vying for a Camping World series championship title. Don Schumacher Racing (DSR) pilots Ron Capps and Matt Hagan sit 1-2 atop the leaderboard, separated by just one point, while Cruz Pedregon Racing owner and wheelman Cruz Pedregon joins the fray in fourth place as the championship battle intensifies.

“We’re eager to return to Las Vegas for the Dodge//SRT Nationals and watch another exciting Funny Car championship play out with three of our brand’s drag-racing stars in the hunt,” said Tim Kuniskis, Dodge Brand CEO – Stellantis. “Our ultra-passionate Dodge drag-racing enthusiasts can expect to be treated to a great showcase of pure Dodge performance this weekend in both nitro and sportsman categories.”

This weekend’s competition marks the fifth national event with Dodge//SRT and Mopar title sponsorship support during the NHRA’s 70th anniversary season and the second of the “Countdown to the Championship” series, which kicked off with the Mopar Express Lane Nationals Presented by Pennzoil at Maple Grove Raceway near Reading, Pennsylvania, in September. The three competing Dodge Charger SRT Hellcat Funny Cars have amassed a total of six victories this year and have won or finished runner-up at each of the previous four Dodge//SRT- or Mopar Express Lane-sponsored events in Houston, Denver, Indianapolis and Reading, Pennsylvania.

Veteran racers Capps and Hagan are focused on continuing that trend aboard their respective HEMI®-powered machines at the Dodge//SRT Nationals while jostling for the points lead as each works to deliver Dodge//SRT and Mopar brands a seventh Funny Car world championship title with the DSR team in 19 years.

After collecting a Wally trophy at the Texas FallNationals that put him within striking distance of his stablemate and then points-leader Hagan, 2016 Funny Car champ Capps is ready to wheel his NAPA AUTO Parts Dodge Charger SRT Hellcat to a second playoff victory. That performance, combined with the following Thunder Valley Nationals semifinal appearance, moved Capps into the championship lead by one point ahead of this weekend’s Dodge//SRT Nationals at the venue where he has claimed five wins.

“I believe this type of scenario is what NHRA envisioned when they came up with the Countdown to the Championship format,” says Capps. “Obviously, we’ve talked all year about how 2021 has been one of the tightest Funny Car battles we’ve seen in a long time, and here we are, two races to go and we’ve got a pretty bunched-up field. Consistency has really been the key for our NAPA AUTO PARTS team. Qualifying high in the field and earning qualifying bonus points has helped put us in the points lead going into the Dodge//SRT Nationals presented by Pennzoil, and we’d love nothing more than to be able to shine for Dodge and Pennzoil at their event.

“We’ve got a great battle going on with our teammate Matt Hagan, and the other Funny Cars are nipping at our heels,” he added. “It definitely seems that this will be a pivotal race; it always seems that way when the points are tight, but our NAPA AutoCare team has given me a great car every weekend, and we’ve won some very big rounds in the Countdown, and I have a feeling there will be more of that this weekend in Vegas.”

Defending Funny Car world champion Hagan and his Mopar Dodge Charger SRT Hellcat Redeye are second in points with three wins this season; two wins came in the playoffs with the help of Tommy Johnson Jr., who subbed for Hagan and won the Mopar Express Lane Nationals to kick off the Countdown. As Hagan aims for a fourth Funny Car title (2011, 2014 and 2020) he understands the importance of a strong performance at the Dodge//SRT Nationals.

“I don’t really approach this event any differently,” says Hagan, who has three Vegas victories and will be defending his back-to-back wins in 2019 and 2020 at the facility. “I approach every round as if it’s the most important round ever. I’ve done that all year long but unfortunately I can count six or seven races where we lost by just two- or three-thousandths of a second. It’s nothing that we haven’t dealt with before. I think every championship that I’ve won has come down to the last race in the semi-finals or finals. So why should this year be any different, right?

“I feel like (crew chief) Dickie Venables is going to be aggressive moving into these next two races,” he added. “We’re going to run hard and let the cards fall where they may but I’m excited about it. It’s going to be fun. It’s business as usual. We’re staying focused and will do the best job we can for our sponsors and our fans.”

Pedregon is chasing a third Funny Car World Championship after earning his first as a rookie in 1992 and then hoisting a championship trophy again in 2008. The Snap-on Tools Dodge Charger SRT Hellcat collected a Wally Trophy at Norwalk in June and has advanced to the semifinals or better at five of the last seven events, including runner-up finishes at Brainerd and Charlotte to put him in championship contention.

“I expect the Dodge//SRT Las Vegas Nationals to be a great race for competitors and fans alike,” says Pedregon, who is tied with fellow contender John Force in fourth place and five rounds behind heading into Vegas. “There are more cars in the hunt now, so I think that’ll make for closer racing and then Pomona is a points-and-a-half race. It’ll make the champion really earn it before they close the deal.”

In Top Fuel action, driver Leah Pruett and her Mopar Dodge//SRT dragster might be out of championship contention but she is still aiming for a top-three finish to improve on her current three-year streak of finishing a career-best fourth for the season. To help that cause, Pruett has her sights set firmly on taking her Mopar Dodge//SRT dragster to the winner’s circle for a second time this year, after an energizing playoff victory in Pomona.

“My entire career has been about proving something and this weekend is about proving that this Dodge//SRT team can be consistent and win races,” says Pruett. “All we can do is race to the best of our ability and that mindset serves us well as we set our sights on getting a win at this Dodge-sponsored track. To play spoiler can seem like fun but really it’s because we are advancing and not because we’re putting any particular opponent on the trailer. We want this win for us and for Dodge.”

The final Constant Aviation Factory Stock Showdown of 2021 will be contested this weekend at The Strip at Las Vegas with Pruett, Mark Pawuk and David Davies competing in the hyper-competitive class aboard their DSR-prepared Dodge Challenger Mopar Drag Paks and racing for manufacturer bragging rights and chasing a final win to close out their season.

“The Factory Stock Showdown finale feels like the ultimate homecoming for me because of how far Dodge and the Mopar Drag Pak program have come these past four years,” says Pruett, who won the 2018 FSS championship as a rookie and has been instrumental in developing the 2021 Dodge Challenger Mopar Drag Pak, the quickest, fastest, most powerful drag pak ever built. “Being a part of the program and its progression, then seeing the growing number of new Mopar Drag Pak entries and their own performance journey, has been truly enjoyable. To see a new generation of drivers choose Mopar Drag Paks as their weekend warrior or fierce piece of weaponry is outstanding.”

Pruett is doubling down this weekend in Vegas, hoping to accomplish something that has eluded her the last four years — drive both her HEMI-powered dragster and her Mopar Drag Pak to wins in the same weekend.

“A final FSS Wally in my final race of the season; I couldn’t ask for much more, except maybe a double-up,” says Pruett, who will pull double duty by competing in both categories for an eighth time this season. “It’s my last shot at it this year. That’s what drives me this weekend and why I feel more determined than ever.”

In addition to all the on track action, Dodge//SRT and Mopar will have their 4,800-square-foot exhibit in the NHRA’s Manufacturers Midway for NHRA fans to explore a number of interactive displays, including a pair of Dodge Challenger SRT Demon simulators to test their skills in a virtual race, as well as the popular Mopar Dodge Charger SRT Hellcat Redeye Funny Car simulator.

NHRA Championship Points Standings:
(Ahead of the Dodge//SRT NHRA Nationals at The Strip at Las Vegas Motor Speedway)

Mopar
Mopar (a simple contraction of the words MOtor and PARts) offers exceptional service, parts and customer care. Born in 1937 as the name of a line of antifreeze products, the Mopar brand has evolved over more than 80 years to represent both complete vehicle care and authentic performance for owners and enthusiasts worldwide.

Mopar made its mark in the 1960s during the muscle-car era with performance parts to enhance speed and handling for both on-road and racing use. Later, the brand expanded to include technical service and customer support. Today, Mopar integrates service, parts and customer-care operations in order to enhance customer and dealer support worldwide.

Dodge//SRT
For more than 100 years, the Dodge brand has carried on the spirit of brothers John and Horace Dodge. Their influence continues today as Dodge shifts into high gear with muscle cars and SUVs that deliver unrivaled performance in each of the segments where they compete.