LONDON, Oct. 27, 2021 /PRNewswire/ — While global leaders and media focus on UN COP26, the climate summit starting this Sunday, 182 government delegations are preparing for another COP meeting. Yet the ninth session of the COP (COP9) to the WHO Framework Convention on Tobacco Control (FCTC) from 8 – 13 November has received little attention and will be conducted in secretive closed sessions. 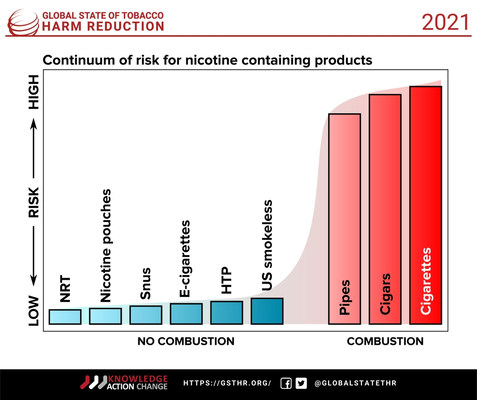 Fighting The Last War: The WHO and International Tobacco Control, the latest report from UK health agency KAC‘s Global State of Tobacco Harm Reduction (GSTHR) reveals that current implementation of the FCTC, which aims to reduce smoking-related death and disease, is a global public health failure. Enacted in 2005 when there were 1.1 billion smokers worldwide, today there remain 1.1 billion smokers, and eight million smoking-related deaths each year.

Parties to the FCTC including the UK and New Zealand have seen marked decreases in smoking after introducing harm reduction policies alongside domestic tobacco control regimes. GSTHR estimates suggest 98 million people worldwide already use safer nicotine products. Yet report author Harry Shapiro argues that the fight against smoking is “now being actively undermined by the WHO.”

“At COP9, government delegations must prevent the slide into outright nicotine prohibition,” said Professor Gerry Stimson of KAC. “This would see a return to smoking for many people and many millions more never able to quit successfully. The age of combustion – for tobacco and for fossil fuels – has to end.”

Launched at a free online event today with international tobacco and drug policy experts and consumer advocates, the report argues that Parties to the FCTC must seize back control of FCTC COP meetings and demand evidence-based discussions on safer nicotine products and tobacco harm reduction. Funding for the GSTHR project was provided by a grant from the Foundation for a Smoke-Free World.