AUSTIN, Texas, Nov. 22, 2021 /PRNewswire/ — Favor, the Texas-born and -based on-demand delivery service, is teaming up with the Dallas Cowboys for the 2021 regular season finale, giving fans the opportunity to win a one-of-a-kind game day watch party inside the team’s world headquarters at The Star in Frisco, Texas. 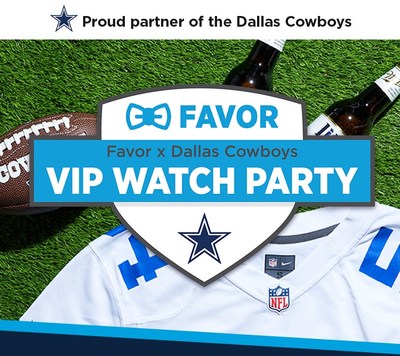 With the Cowboys set to close out the regular season on the road in Philadelphia, Favor will deliver the ultimate VIP private watch party experience to Cowboys HQ during week 18. One lucky fan and nine friends will be joined by a Dallas Cowboys Pro Football Hall of Famer and gain exclusive access to the official Dallas Cowboys Draft War Room to watch one of the league’s greatest rivalries face off on Jan. 9, 2022.

“We are thrilled to partner with Favor to provide a lucky fan the opportunity to watch an actual game inside the War Room,” said Katie Stucky, senior director of corporate partnership marketing, Dallas Cowboys. “This is truly a money can’t buy experience. The War Room is one of our most coveted treasures within The Star and being able to cheer on the Dallas Cowboys with a Cowboys Legend inside the War Room truly is something special!”

Now through Dec. 17, 2021, any fans who place a Favor in the DFW Metro area will be automatically entered to win the Favor x Cowboys VIP Watch Party. For the chance to win this exclusive experience or learn more, visit favordelivery.com/cowboys-sweepstakes.

NO PURCHASE NECESSARY. Must be 18+, Dallas-Fort Worth Metro resident. Enter automatically with completed Favor order or by mail. Ends Dec. 17, 2021, at 11:59:59 p.m. Central Standard Time. See Official Rules at favordelivery.com/cowboys-sweepstakes-rules for prize/entry info and more.

About Favor
Favor is the easiest way to get anything delivered in under an hour. Whether it’s lunch at the office, a household shopping list or those errands you just don’t have time for — your personal assistant (we call them Runners) can deliver it in just a few taps. Founded in 2013, in Austin, Texas, Favor currently operates in more than 200 cities across Texas with over 100,000 Runners, who have delivered more than 50 million Favors to-date. For more information, visit favordelivery.com and follow Favor on Facebook, Twitter, Instagram and TikTok.