GUATEMALA CITY, Nov. 19, 2021 /PRNewswire/ — In its special edition for the Bicentennial of the Independence of Central America, the magazine Estrategia y Negocios highlighted the leadership of Dionisio Gutiérrez, President of Fundación Libertad y Desarrollo, among the most admired businessmen in the region. 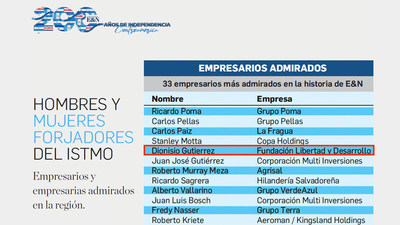 Gutiérrez, who is on the top five places, was included in the section “Men and women forgers of the Isthmus”, for his contributions to development and the construction of democracy in Central America. The magazine explained that: “The audiences noticed the call to propose their favorites entrepreneurs, leaders and companies that have marked the economic development of Central America from the past and with a view to the future.”

Additionally, he was the director and host of the well-known TV show, Libre Encuentro, in which he conducted analyses, debates, and proposals for twenty years. Afterwards, he was the director of the TV show entitled Dimensión, and nowadays directs and presents Razón de Estado TV show.

Nowadays, Dionisio Gutiérrez is the president of the Latin American think-thank Fundación Libertad y Desarrollo where he develops multiple civic activities and works on the articulation of long-term State proposals for the region. He also hosts the television program Razón de Estado, which is dedicated to the promotion, debate and reflection of freedom, democracy and the rule of law.

In 2012, Power Awards and the American Business Council Foundation of the United States of America, granted him the award “Empowerment for Democracy” and in 2014, His Majesty, King Phillip VI of Spain, awarded him with the Order of Civil Merit in Degree of Commitment.

Moreover, in February of 2021 he became the only Latin American on the Freedom House Board of Trustees.