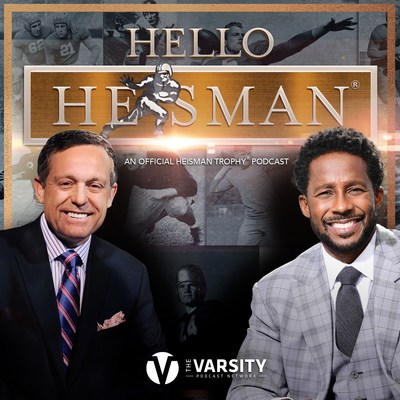 Episode 1, featuring former Florida State quarterback and 1993 Heisman Trophy winner, Charlie Ward, is available to download now on Apple Podcasts, Spotify, iHeart and other platforms. Fans can watch the video on The Varsity Network YouTube Channel as well. Hello Heisman – one of several original programs for college sports fans created by LEARFIELD – will be housed on The Varsity Podcast Network, a portfolio of nearly 115 school and independent podcasts like Solid Verbal and Shutdown Fullcast powered by LEARFIELD.

Hello Heisman will comprise of 14 episodes from October 2021-January 2022. Each week, Howard and Roberts will lead conversation and interviews around one of the most recognizable awards in sports as a catalyst for discussing the game’s greats from their different backgrounds and points of view. Guests will include Heisman hopefuls, past winners and top talent with a passion for college football. Roberts is a 13-time Emmy Award-winning broadcaster and writer most known for his work on NBC and Golf Channel. Howard is a member of the College Football Hall of Fame and won the Heisman trophy while playing for the University of Michigan.

“As a former Heisman Trophy winner, I know how coveted the award is. We think Hello Heisman will be a great opportunity to tell college football stories through the lens of the Heisman Trophy,” said Howard. “Plus, the chance to work with Jimmy at this point in our careers was extremely exciting. And, he begged me to do it.”

Roberts added, “I didn’t exactly beg Des to do it, I just texted him 12 times a day until he finally said yes. In all seriousness, as a Heisman Trophy voter, I take my vote–and the award–very seriously. Storytelling in a free-flowing format like a podcast, with someone like Desmond, around college football, well, that was simply a no-brainer.”

“Hello Heisman is a terrific addition to our podcast network, and no doubt Desmond and Jimmy will deliver an exciting and entertaining show each week,” said LEARFIELD SVP and Head of Content Grant Jones. “We’re intent on providing fans compelling content they can consume 365 days a year – whenever, whenever and however it’s most convenient for them, and The Varsity Network is our conduit for that. At nearly four million downloads in September alone, we’re thrilled about what’s ahead.”

In addition to Hello Heisman, LEARFIELD recently added the popular Geoff Schwartz Is Smarter Than You to its portfolio of podcasts housed within The Varsity Podcast Network. Former NFL offensive lineman Schwartz releases new episodes each Monday, Tuesday and Thursday. Continued growth of The Varsity Podcast Network is another step in LEARFIELD’s desire to deliver quality programming to college sports fans every day, not just on game day. Its complement, The Varsity Network app, launched Week 1 of college football, has had more than 85,000 downloads. It provides free, simultaneous gameday streams from over 100 schools with university hometown broadcasters, as well as other original and national programming like College Football Blitz and College Football Rewind.

LEARFIELD is a leading media and technology services company in intercollegiate athletics. The company unlocks the value of college sports for brands and fans through an omnichannel platform with innovative content and commerce solutions. LEARFIELD services includes licensing and multimedia sponsorship management; publishing, audio, digital and social media; data analytics; ticketing, ticket sales and professional concessions expertise; branding; campus-wide business and sponsorship development; and venue technology systems. Since 2008, it has served as title sponsor for the acclaimed LEARFIELD Directors’ Cup, supporting athletic departments across all divisions.