WASHINGTON, Oct. 11, 2020 /PRNewswire/ — Representatives of the Congress of Azerbaijani Societies of America (CASA), which represents the thousands of Azerbaijanis living in the United States, are imploring the U.S. government to take a stand against Armenia’s recent and ongoing attacks on Azerbaijan and the gross violations of international humanitarian law.

On October 10, 2020, following its breach of the temporary ceasefire reached a day before between Armenia and Azerbaijan with the Russian mediation, Armenia hit Ganja, the second largest city in Azerbaijan. Armenian forces fired Tochka-U ballistic missile at a residential building killing at least nine people and injuring 34 others, including minors.

CASA is reaching out to elected officials and the media in an attempt to shed light on the situation, educate U.S. citizens about the conflicts, and convince the United States to exert its influence over Armenia and force the immediate liberation of the occupied Azerbaijani territories.

“We report with a heavy heart that Armenian armed forces violated the ceasefire and intensively fired on the positions of the Azerbaijani Army on the frontline using large caliber machine guns and sniper rifles,” said Tarlan Ahmadov, a CASA member living in Portland, Maine. “The Armenian army opened fire on the densely-populated civilian areas on the frontline resulting in casualties and extensive damage.”

The attached fact sheet, created by CASA, outlines the desperate situation and supplies additional details on the number of casualties, injuries, and facilities and homes that have been destroyed thus far. The fact sheet also spotlights Russia’s involvement in the conflict—maintaining the instability by providing arms to both sides. In addition, the statement below expresses CASA’s request to the U.S. government.

“We want a peaceful end to this situation,” said Ahmadov. “The U.S. has interests in this oil rich nation and has also been affected by Russian interference in its politics. We are worried about our families and friends, and we believe the United States has many motivations for getting involved.”

STATEMENT of the Congress of Azerbaijani Societies of America:
We, the Azerbaijanis living in the United States and Azerbaijani diaspora organizations, are protesting against the initiative of Congresswoman Armenian democrat Caucus Co-Chair Jackie Speier, who is set to introduce in the House a resolution HR 1165 (draft), promoted by a group of 48 Members of the House lobbied by Armenian Assembly of America. The resolution will hinder the process of liberation of internationally recognized south-western territories of Azerbaijan – Karabakh and surrounding regions – from the continuous occupation by Armenia’s armed forces, backed by Russia and Iran. It will also prevent the process of returning hundreds of thousands internally displaced people to their lands and homes.

We believe the US Congress should be aligned with international law and United Nations resolutions, which are both very clear about this matter.

At around 06:00 on September 27, 2020, Armenian armed forces violated the ceasefire and intensively fired on the positions of the Azerbaijani Army on the frontline using large caliber machine guns and sniper rifles. Opening fire on the densely-populated civilian areas on the frontline and local facilities is yet another deliberate and targeted provocation by the Armenian armed forces. As a result of the provocation of Armenian invasion forces, there are casualties among the civilian population and servicemen of Azerbaijan. Many houses and civil facilities were severely damaged as well.

Deliberate targeting of civilians with the intent to kill or force out is a gross violation of international humanitarian law, including the Geneva Conventions of 1949. Khojaly Genocide of February 1992 and the Tovuz provocation in July 2020 are clear examples of Armenian armed forces targeting civilians for ethnic and territorial reasons. Despite the ongoing General Debate at the UN General Assembly’s 75th Session on September 29, 2020, and the global fight against the COVID-19 pandemic, Armenia has once more shown its disregard of international law, UN Regulations, and the international community.

The deadly provocation of the Armenian armed forces on the border with Azerbaijan in the direction of Tovuz region is clear. The US Congress has classified Armenia as the aggressor country as well. Because Armenia is conducting illegal settlements in the occupied territories of Azerbaijan, it has clearly violated the requirements of the Geneva Convention and international law. Armed fighters from countries with known terrorist groups, such as Lebanon and Syria, have already begun fighting in the occupied territories for Armenia.

Armenian government continues its strategy of provocation by refusing to implement UN Security Council Resolutions 822, 853, 874 and 884, the UN General Assembly Resolutions on the “Situation in the Occupied Territories of Azerbaijan” adopted in 2006 and 2008, ignoring the appeals of UN and WHO and other key international organizations, and disregarding the norms and principles of international law – all while Azerbaijan is grappling with the COVID-19 pandemic.

The government of Armenia has grossly violated the fundamental human rights of Azerbaijani citizens by creating a life-threatening living situation in the region. Their actions should be unilaterally condemned by international organizations and they should be forced to stop their strategic military aggression immediately. 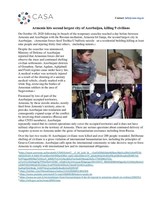 Asian Hall of Fame Announces $250,000 Founders Match Campaign And Call For New Directors And Trustees To Join Its Expanding Leadership