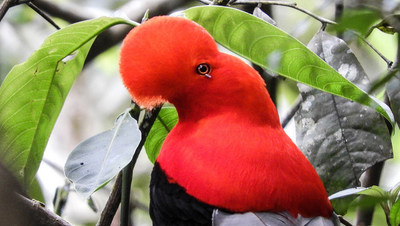 MIAMI, May 21, 2020 /PRNewswire/ — Once again, and for the fourth time in a row, Colombia took first place in the Global Big Day, a bird counting competition held worldwide on May 9. With a total of 1,440 species observed, surpassing countries such as Peru, Ecuador, and Brazil, hundreds of birders from all over the country spied the highest number of species in the world from the comfort of their homes.

The international championship, organized by the Cornell Lab of Ornithology at Cornell University, invites experts and amateurs all over the world to register birds on its eBird platform. This year, the contest was held virtually, inviting “birding” from home, and achieving record participation with over 48,000 birdwatchers.

“Colombia’s potential in nature tourism is once again confirmed. Winning this competition for the fourth consecutive year means that Colombia’s biodiversity is invaluable and that we must protect it with responsible tourism and activities such as the Global Big Day that generate conservation awareness. This is another reason to keep in touch with foreign travelers and be ready to receive them once international tourism is reactivated,” remarked Flavia Santoro, president of ProColombia.

For the organizers, logging these animal sightings provides important information to help preserve them. All photographs of the birds are uploaded to the eBird platform, which is publicly accessible for the purpose of conducting research for their conservation.

ProColombia and the Colombian Embassy in the United States are fully committed to keep promoting the country as a world class destination for birdwatching throughout the current situation by developing activities such as webinars and virtual birdwatching experiences.

Shortly after winning the first place in the Global Big Day, Colombia got another recognition: The country’s official tourism website www.Colombia.travel led by ProColombia won the Webby People’s Voice Award through a massive online voting in more than 70 countries.

The Webby Awards were founded in 1996 by the International Academy of Digital Arts and Sciences in the United States and are held annually to recognize the best online projects.