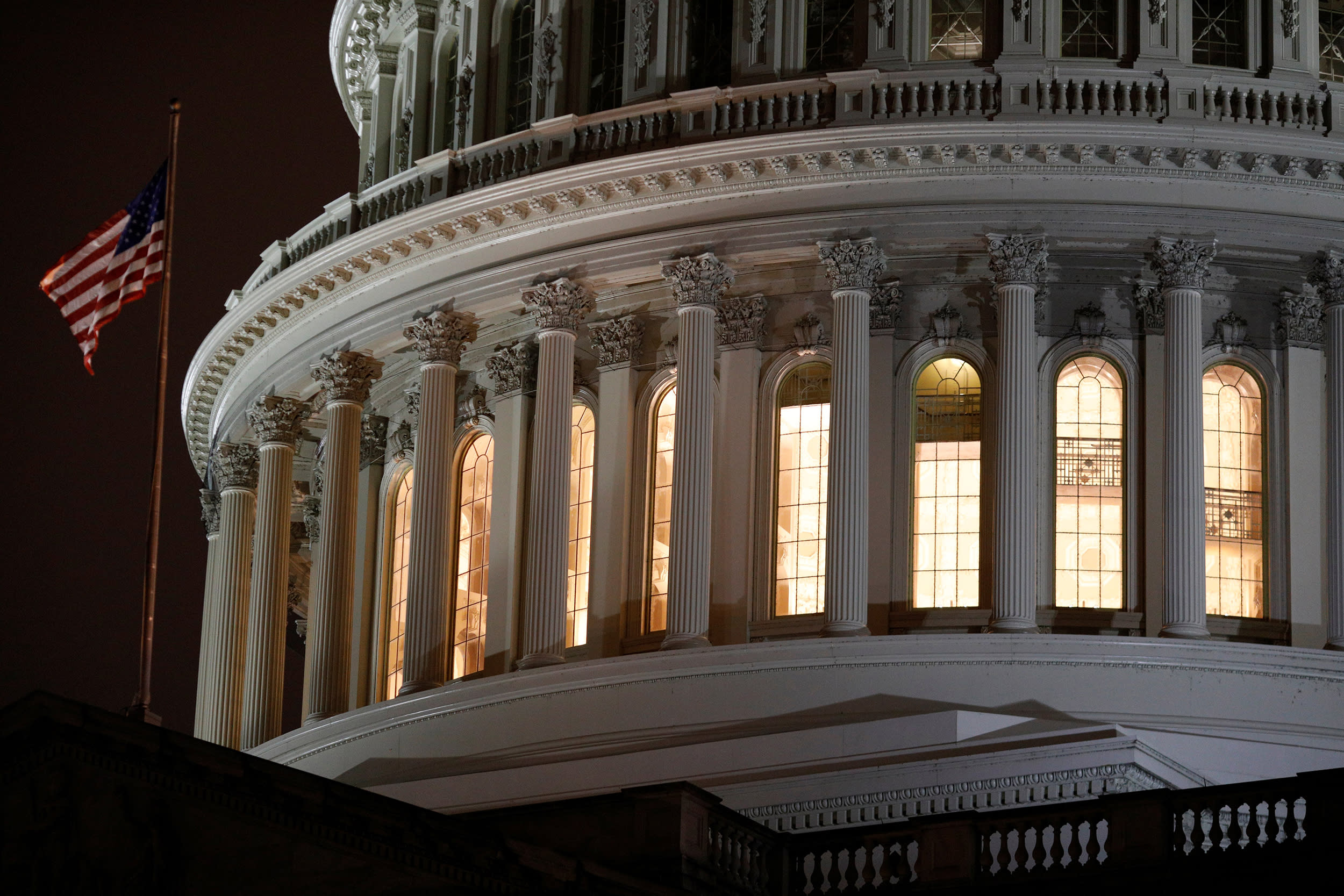 WASHINGTON — The Senate overwhelmingly passed a massive stimulus package late Wednesday meant to soften the economic blow of the coronavirus pandemic for American workers and businesses.

The bill includes billions of dollars in credit for struggling industries, a significant boost to unemployment insurance and direct cash payments to Americans. The fate of the bill now rests with the House, which Majority Leader Steny Hoyer, D-Md., said would not vote until Friday.

A small group of senators opposed to an unemployment funding provision for out-of-work Americans in the $2 trillion bill failed to get enough support for a change, clearing the way for the Senate to pass the emergency measure aimed at propping up an economy severely wounded by the coronavirus pandemic.

The amendment, offered by Ben Sasse, R-Neb., did not reach the 60-vote threshold. It failed 48-48 largely along party lines.

The final measure was passed 96-0.

impeachment trial.” data-reactid=”17″>Senate Majority Leader Mitch McConnell, R-Ky., said in a speech Thursday shortly after midnight that he was proud that the bill passed with bipartisanship, noting that it came weeks after President Donald Trump’s impeachment trial.

“From arguably the most partisan, divisive thing you could possibly do to coming together entirely, 100 of us, to meet this challenge, I think, says a lot about the United States Senate as an institution, our willingness to put aside our differences and to do something really significant for the country,” he said.

Shortly afterward, Senate Minority Leader Chuck Schumer, D-N.Y., said despite the late-night haggling and debates, he believed the historic bill would get across the finish line.

“This is a good ending. Twists and turns were enormous, there were some down moments, but those of you who kept asking, ‘Are we going to get a bill?’ I always had faith we would. Because America and the American people demanded it,” he said.

Sen. Dan Sullivan, R-Alaska, hailed the bill but chided the Senate in a speech shortly after midnight, saying the chamber should not take a scheduled 30-day recess. Senators should instead stay and work on what he called Phase Four of coronavirus relief legislation, he said.

“Because if there’s one thing about this crisis that we’ve already seen is that new challenges pop up every day, every minute, every hour,” he said. “And yet we’re going to go on recess for almost a month. Don’t understand this. I don’t agree with it.”

House Democratic leaders said they need to see bill’s text and review the package before deciding whether to take it up or when.

“The Senate is going to stand together, act together and pass this historic relief package today,” McConnell said, addressing the chamber around noon Wednesday. “Struggling Americans are going to go to their mailboxes and find four-figure checks to help with their bills. Why? Because the Senate stepped up.”

Earlier Wednesday, Schumer said that while the bill was “far from perfect,” it had “improved significantly to warrant its quick consideration and passage.”

“I encourage the House to pass this vital legislation and send the bill to my desk for a signature without delay. I will sign it immediately,” Trump said.

House Speaker Nancy Pelosi, D-Calif., said in a statement Wednesday morning that the legislation “takes us a long way down the road in meeting the needs of the American people,” but she did not say whether or how the House would take up the legislation.

House Democrats will review the provisions of the measure “to determine a course of action,” she said.

She said Wednesday on CNN that once the Senate passed the bill, Hoyer would give members 24 hours’ notice that it would be on the floor and give them a chance to review it. Pelosi said she believes she has the votes to pass it once it reaches the floor.

“I believe that at that time, one option we will not have is unanimous consent, because there are those who might object to that, but we can take a voice vote, and if someone calls for a recorded vote, we are prepared to go in that direction, as well,” she said.

The speaker said Wednesday on “PBS NewsHour” that if there is an objection, there is a plan under which members could safely participate on the floor in debate and in voting.

Under the plan, people making up to $75,000 a year are expected to receive checks for $1,200. Couples making up to $150,000 would receive $2,400, with an additional $500 per child. The new agreement removed the phased-in provision that would have excluded lower-income Americans from receiving the full benefit.

“Our expectation is within three weeks we will have direct payments out,” Mnuchin said at the White House briefing.

Unemployment insurance would also be significantly bolstered for four months by increasing payments and extending the benefit to those who typically do not qualify, such as gig economy workers, furloughed employees and freelancers. Specifically, the bill would increase the maximum unemployment benefit that a state gives to a person by $600 per week and, according to Schumer, ensure that “laid-off workers, on average, will receive their full pay for four months.”

The agreement also would prohibit businesses controlled by Trump, Vice President Mike Pence, members of Congress and heads of executive departments from receiving loans or investments from Treasury programs.

Negotiations, however, came to a head over how much additional unemployment insurance should be extended, as well as aid for distressed corporations. Democrats, specifically, opposed what they called a $500 billion “slush fund” for big corporations, but the final deal includes oversight measures for that money. Schumer said the initial Republican plan would not have dedicated enough money to hospitals, and he called for a “Marshall Plan” for the health care system.

Senators, along with representatives from the White House, huddled in the Capitol over the weekend and early this week to hammer out a deal.

Legislation rarely moves this rapidly in Washington, especially a bill of this size. But both parties appeared motivated to act quickly as unemployment numbers continue to rise and more businesses are forced to close their doors.

Tensions flared earlier in the week as the White House and Republican leadership fell short of their goal to have a bill on the president’s desk by Monday.