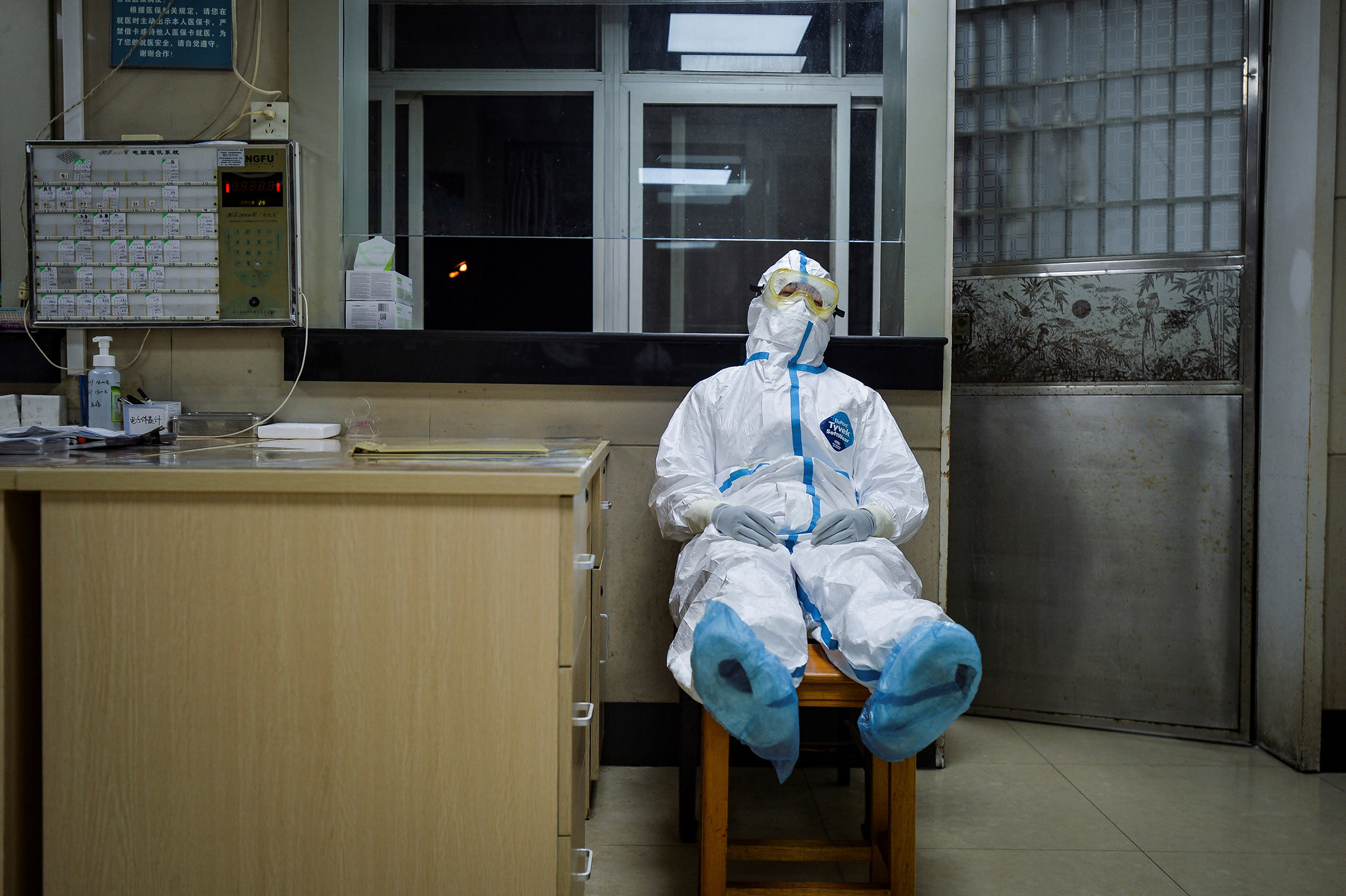 • Number of deaths in mainland China now reported at 1,380

China’s national health commission says that there have been 1,380 deaths due to COVID-19, the new name for disease caused by the novel coronavirus, as of Friday morning. The number represents a decrease in deaths previously reported in Hubei province, which is at the center of the outbreak.

There are more than 63,800 confirmed cases in mainland China, according to the latest numbers from China’s national health commission.

Officials in Hubei province have changed the way they are diagnosing and reporting cases. They are now identifying cases based on what the patients’ lungs look like on CT scans, rather than waiting for lab results to confirm infection with the virus.

A large increase in cases from Hubei reported Thursday morning local time “largely comes down to a change in how cases are being diagnosed and reported,” Dr. Mike Ryan, executive director of the WHO’s health emergencies program, said.

“This does not suggest a significant change in the trajectory of the outbreak outside China,” Ryan said. The vast majority of the confirmed cases, and nearly all of the deaths, have been in mainland China. — Phil Helsel and Leou Chen

The first case of COVID-19 has been diagnosed in Texas, bringing the U.S. total to 15.

On Thursday, the Centers for Disease Control and Prevention confirmed that the patient is one of the passengers who was evacuated from Wuhan, China and flown to Lackland Air Force Base in San Antonio on Feb. 7.

All of those passengers, including the person diagnosed with COVID-19, have been under federal quarantine since arriving in the U.S. last week. They will remain on base until Feb. 20, though the patient with COVID-19 could stay longer if still sick.

The patient is hospitalized in a special isolation room and was a solo traveler from Wuhan, health officials said. Paul Hancock, chief medical officer for Methodist Healthcare, said the person tested positive on Wednesday and “is stable with mild symptoms.”

“There will likely be additional cases in the coming days and weeks, including among other people recently returned from Wuhan,” the CDC said in a statement.

More than 600 people who were evacuated from Wuhan on flights chartered by the Department of State remain under a mandatory 14-day quarantine at several military bases. — Erika Edwards

A large jump in number of confirmed cases in China

China’s Hubei province, the center of the coronavirus outbreak, reported a stark rise in the number of new cases Thursday, dashing hopes that the epidemic may have been slowing down.

Health officials in Hubei reported 14,840 new cases, most of them in Wuhan, the capital of Hubei province where the virus is believed to have originated.

The province also said another 242 people had died from the coronavirus Wednesday, bringing the total there to 1,310. Tuesday’s death toll in the province was 1,068.

This took the total number of deaths in mainland China to 1,367, an increase on the 1,113 figure reported Wednesday.

Across mainland China, there were 15,152 new confirmed infections Wednesday, bringing the total number of cases to 59,805, a significant jump that’s sure to raise concerns about the true scale of the epidemic in China. — Yuliya Talmazan

Forty-four more people have been confirmed to have novel coronavirus from a quarantined cruise ship in Japan, bringing the total number to 219, Japan’s health ministry said Thursday local time.

The toll includes one quarantine officer who tested positive Wednesday.

The Diamond Princess is being quarantined off Yokohama, and testing began after a man who was on the ship last month later tested positive for the coronavirus.

The nationalities of the 44 newly diagnosed people were not immediately identified, but the overall cases from the cruise ship include at least 32 Americans.

Of all the people from the cruise ship who have tested positive for the coronavirus so far, five are considered to be in serious condition, Japan’s health minister, Katsunobu Kato, said.— Arata Yamamoto

A cruise ship which had spent two weeks at sea after being turned away by five countries over fears that someone aboard may have the coronavirus arrived in Cambodia on Thursday.

The MS Westerdam, which has 1,455 passengers and 802 crew on board, arrived at an anchoring point in the Cambodian port town of Sihanoukville early Thursday morning, according to data published by the Marine Traffic website.

Although no one on board has fallen ill, the ship had been turned away by Japan, Taiwan, Guam, the Philippines and Thailand over fears that someone on the ship could have coronavirus.

Most passengers will be able to disembark and begin their journey home via chartered flights from Phnom Penh, the Cambodian capital, starting Thursday. — Reuters

“Wartime control measures” will be implemented in the cities of Shiyan and Xiaogan in Hubei province on Thursday.

The measures, which include the closure of all buildings, will last for at least 14 days.

This is the first time Chinese authorities have announced such control measures publicly since the outbreak of the coronavirus.

Those who defy the measures will be detained, local authorities said. — Leou Chen and Dawn Liu

Jiang Chaoliang, the secretary of the provincial Communist Party committee of Hubei province, has been removed from his position, according to Chinese state media Thursday. He will be replaced by Ying Yong, the former mayor of Shanghai.

Jiang’s departure follows the firing of two other senior officials in Hubei. In Hong Kong, the head of the Hong Kong & Macao Affairs Office Zhang Xiaoming has also been replaced.

The public has widely criticized local officials for their handling of the outbreak. — Eric Baculinao and the Associated Press

Hong Kong’s education secretary said Thursday schools will stay closed until at least March 16 in an effort to prevent the spread the deadly virus.

Secretary of Education Kelvin Yeung said in a news conference that further assessment is needed to determine when schools will reopen.

Hong Kong has shut all but two of its land and sea border points to mainland China and on Saturday, began enforcing a 14-day quarantine on arrivals from the mainland to try to prevent the spread of the virus.— Associated Press

Oil demand this year will see the slowest rate of growth since the 2009 financial crisis, as the coronavirus outbreak hits Chinese consumption and its impact spreads across the international economy.

“The consequences of COVID-19 for global oil demand will be significant,” the International Energy Agency said in a monthly statement Thursday.

More generally, transport shutdowns and a halt in industry in China are expected to hit exports and the broader global economy.

The sharp rise in the headline number of deaths and infections unnerved world markets, according to Reuters, as traders have halted a recent rally in stocks and retreated back to the safety of government bonds and gold. — Reuters

South Korea quarantined 740 soldiers Thursday as a precautionary measure relating to coronavirus fears, according to the South Korea Defense Ministry.

“We have 740 soldiers, who have visited China or were in contact with confirmed patients of COVID-19 under the self-imposed quarantine. But, so far, no South Korean soldiers has been infected by the COVID-19,” a defense ministry official told NBC News. — Stella Kim

Vietnam has quarantined a community of 10,000 people near the capital, Hanoi, for 20 days because of fears the COVID-19 could spread, two local officials told Reuters on Thursday.

The rural commune of Son Loi, in the northern Vietnamese province of Vinh Phuc — 27 miles from Hanoi — is home to 11 of the 16 coronavirus cases in the Southeast Asian country, including a three-month-old. — Reuters